The Gospel Teaches Us to Play: A Personal Story – David Elston 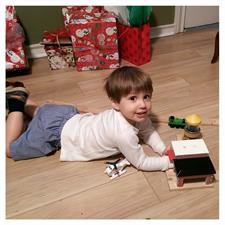 “Come play trains with me, Daddy.”

“You watch Peppa Pig with me?”

Without fail, when I come home from work each day, I am greeted by one of these requests from my three-year-old son, Judah. Of course, it comes with an irresistible hug and a big smile. It fills my heart to have the kind of relationship with him where he looks forward to me coming home and waits all day for me to play with him. Mommy doesn’t quite wrestle or play trains like Daddy does…

About a year ago, however, neither Judah nor I knew how to play. I’d sit down with him and he’d just start bashing his trains together. Or he’d play with his trucks for thirty seconds and then go and find his bag of dinosaurs and dump them out, which would last for two minutes before he went to find his giant Lego blocks. He simply didn’t know how to play. He didn’t know how to pretend.

And so he and I began to work on that. We focused mainly on his collection of Thomas the Train engines:

It has been one of the joys of parenting to see Judah actually learn how to play. My wife and I will hear him back in his room pretending to be Sir Topham Hatt, chiding the trains for causing “confusion and delay.” His “bashing” has gone from 100% of his play time to about 10%. And he’s actually engaging his imagination into his activities, such that he can even play by himself. Victory!

But as I said earlier, Judah was not the only one who didn’t know how to play. I didn’t. And in some ways, I still don’t. You see, Judah’s lack of play was due to childish ignorance. Mine is far darker in nature. There is often a resistance to playing within me. If it is not there at first, after 30 minutes or so of make-believe, it will be there: a nagging sense of “I’ve got to get up and go do something real, something that matters.” I could give that feeling a harmless name like “restlessness.” I could justify it and say that it is just an introvert’s need for some “time alone” after a long day at work. But at its core it is a failure to believe in the gospel of Jesus Christ.

That may seem like quite a jump. Let me explain. The Bible points out what we all at least subconsciously know – that before God and before the world we as humans are insufficient. We fall short of the purpose we were meant to fulfill. There are two typical responses to that.

One typical response is that we feel we must do something about our insufficiency. And so we set about life to establish ourselves through our accomplishments and relationships and possessions (etc). Paul describes this response in Romans 10:3 as “being ignorant of the righteousness of God, and seeking to establish their own [righteousness].” As much as I hate to admit it, when I am playing with Judah and feel restless, I am operating as one needing to establish myself, feeling like playing with my son is not contributing to my sufficiency before God and man.

The alternative and biblical response to that feeling of insufficiency is to admit our inability and, rather than attempt to establish it ourselves, we accept God’s provision for it: the gift of righteousness through his Son, Jesus, which was wrought in his life on earth and offered up at his crucifixion. Because of Christ, there is no lack in those who believe. We are sufficient and righteous before God. And so, as I sit at the Thomas the Train table, if I believe the gospel, there will be no restlessness, since my insufficiency has been taken care of by Another. I am free to play.

So Judah is not the only one who is learning how to play here. As I teach Judah how to play, Christ teaches me how to live. By the gospel giving me freedom to play, it is essentially freeing me for selfless love toward my son. As I play with Judah, I am doing something that in no way advances my career or builds up my portfolio or really benefits me in any way at all. It only benefits him. What a way to represent our Savior to our children!

Our Savior stooped down, as it were, to “play” with us on earth, loving and living perfectly among us. And what did he gain from it? Nothing – he was crucified! We gained from it, of course, but his entire life was one of serving others with no present return on investment! May his example inspire us, and better yet, may his gospel free us to do small and seemingly insignificant things like play with our children.