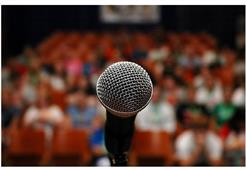 There I was – a seminary student afraid to preach. Worse than that, I was afraid to even speak up in class. Everyone else seemed so bold and confident about public speaking, some even enjoyed it. But for me, the daily pressure of the classroom left me feeling anxious. I felt hopeless at the looming thought of preaching classes later in the curriculum. Victoriously battling this fear seemed an impossible task. I began to doubt my place in seminary, even my calling into ministry. Would I ever get past it?

Years earlier in college I’d had several very negative experiences in public speaking. The kind that leave you with unshakable shame. I searched the Scriptures prayerfully for some kind of guarantee that I would not fail in this way again. But I found no such guarantee in the Bible and therefore no solace. I wanted certainty. Certainty of success. Certainty of approval.

I couldn’t pray the fear away either. Prayer certainly helped me find some measure of peace in the midst of this battle, but nevertheless, when I walked from my apartment to class, my heart was not beating rapidly merely from the uphill walk; my palms were not only sweating from the heat of the day. No, these were the bodily symptoms of a fearful heart and a worried mind at war.

Was the Bible I so diligently studied in seminary insufficient for such a problem? Was prayer simply a therapeutic exercise to take the edge off the troubles of daily life?

One day I was on a camping trip with two good friends, and I mentioned “my fear of public speaking.” That was the way I always said it: “my fear” of public speaking. One of the friends in the car said to me, “David, maybe you should re-think the way you consider this fear. Sometimes it seems you use it as a crutch to avoid things you don’t want to do, things to which God is calling you.” I hardly had time to process the sentence before I was cut to the core by the Spirit’s conviction. I knew he was right. “My fear” of public speaking was not something that had me helplessly in its grip. I had it in my grip, and was using it for my own selfish purposes. I was using it as a way to protect myself. I was using it as a way to preserve my reputation. I had justified what the Bible calls “fear of man” by thinking of myself as a helpless victim of this fear. Ironically, the fear was not only a crutch of my own sinful heart, but also an invitation to rest in the faithfulness of my Savior.

The Spirit was gracious in granting repentance in that moment and throughout the rest of seminary. It was not until I saw my fear for what it was that I could read God’s Word and be truly, profoundly helped. His Word is sufficient after all!  It was not until I saw my fear accurately that I could pray properly, confessing my mistrust and finding grace in time of need. And in the end, I made it through the preaching classes just fine, even through the “roasting” that occurred after the sermon was preached (the students were given time to critique the sermon). And then it was over, I graduated.

But the battle was not over. Just a few months later, as I was in an internship at a church, it was time to see if I was truly “over” the fear. Thankfully, this time I knew where to fight the battle. After all, peace is a fruit of God’s Holy Spirit, not a personal feeling. Peace did not come through certainty of success. Peace did not come through a guarantee that I wouldn’t embarrass myself. Peace came through fearing God rather than man. By “fearing God” I mean putting God’s purposes above mine, seeking his kingdom before mine, proclaiming his name at the risk of mine – things that we only do as we trust the One who died for us.

There was no Scripture that brought this home more than Acts 20:24: “But I do not account my life of any value nor as precious to myself, if only I may finish my course and the ministry that I received from the Lord Jesus, to testify to the gospel of the grace of God.” Paul left the comfort of the Ephesian church and headed toward Jerusalem, where he knew suffering likely awaited him. And even though he had no guarantee of safety, he pressed on, knowing he could trust a God who had given his Son for him.

Likewise, as I climbed up the stairs to the stage and stood behind the pulpit, I didn’t know what was about to happen before this congregation. Would words come out of my mouth? Would I be able to keep breathing? Would I have a panic attack? I didn’t know. But I did know that I could go forward into this moment of risk because this moment was, as John Newton says, “held in hands that bled for us.”

I have preached many times since. And after six years in ministry, I still get nervous. Every time. It will probably be a struggle for the rest of my life. But I have learned this: that there is nothing that remedies the fear of man like the fear of God; that there is no balm that heals worry like worship; and there is nothing that cures the anxiety of self-preservation like throwing your life away in the service of the King.